Returning from vacation, dealing with a small case of jet lag (I'm back to being my night owl self though) means that the blog is still in a bit of a not really up to date case, and give all the drama that went on during the past week, I'm surprised at how motivated I am to keep blogging, even if I'm not at my most productive!

Today I'm starting with three mini reviews for the 3 books that were the Classic Middle Grade & YA readalong this past month of October at The Midnight Garden! I love discovering amazing books that I love now and that I know I would have loved in my younger years! 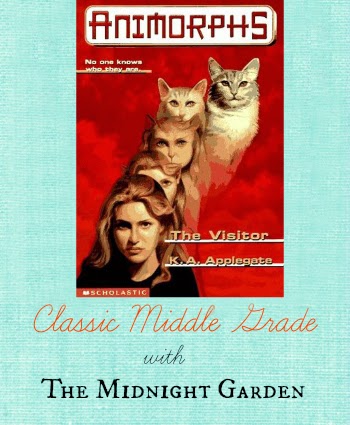 The Invasion by Katherine Applegate


Another series that I missed in my youth and that I got to read thanks to the ladies at The Midnight Garden Classic Middle Grade readlong!

I've always been a big fan of science fiction and this is classic science fiction with aliens and spaceships and a war between good and evil that spans galaxies and ends up at our doorstep.

The first book follows Jake's POV, he's one of the group of five kids that decide to take a shortcut through an abandoned construction area and end up being the first to establish contact with an alien, being warned of the invasion going on in Earth by another race of aliens and give special powers to try and fight them.

I loved how the kids' reactions were extremely believeable, they were scared and intrigued and fascinated and then even more scared. But they decide that whatever they witnessed can't be ignored and do whatever is in their power to help fight! Marco isn't very keen on the idea, Tobias is the most determined of them all, his past probably given him more reason to fight for something that will seem more worthy than what he has, Jake at first doesn't want to fight either but feels that it cannot be ignored and the same goes with Rachel and Cassie.

The aliens are insidiously taking over human hosts under the cover of a group/association called The Sharing, that just my name gives a "body snatchers" vibe to me, and the group decides that they need to free as many unwilling hosts as possible, once they discover a place where aliens can be vulnerable. They try to prepare as best as they can, but even with their morphing... they just cannot fight all the aliens and fail at rescuing people & barely make it out of there alive. And not only that, there's quite a tough consequence to their trying to do the right thing and that I wasn't expecting so early in the series!

A really intriguing first book, with characters that are flawed but likeable and that I think would be a perfect introduction to science fiction! 3.5 stars for this one!

The Visitor by Katherine Applegate


After the events in book one we have the 5 Animorphs reeling with Tobias plight and with the revelations of who all are working with the Yeerks, voluntarily or not. This one is on Rachel's POV and it made me love her character even more!

She's one strong and determined girl and one that doesn't like that anyone think that she can't do what others can do because she's a girl, and she's got quite some awesome sass in her.

The mission now for the Animorphs is trying to get intel and find out the new location of the Yeerks pool and to do so they need to spy on Mr Chapman, a human Controller, and the best way to do so in for Rachel to morph into the family's cat: Fluffy McKitty.

This book deals with the voluntarity of sacrifice and how not all hosts were passively accepting their Yeerk masters, and also details a lot more on the effects of morphing, not only during the experience and how you feel what the animal is feeling by instict and emotion but also how that affects you and how there's a fight for control between the animal mind and the human mind. I loved the descriptions of being a cat and how essential they're the most awesome animals, because even when scared, they take no crap from anyone!

I really liked that parents are shown in this book, trying their best to protect their kids as is within their limited means, and not simply be absent or dismissive. I understand that all the kids are unsure about talking to their parents or any other adults, cause you don't know who could be a host to a Yeerk.

Another really fast and gripping read with quite complex themes being addressed but with no preachy feel to it, well deserved 3.5 stars.

The Encounter by Katherine Applegate


This third book has Tobias as main POV and it was the most heartbreaking of the lot so far for sure!

This review will probably have a few spoilers for book 1 and 2 so please be aware of that, and read at your own risk!

The animorphs have survived another battle and have eluded Visser Three for the second time, but things are becoming more and more dangerous with every interaction, even more because they're suspected of being Andalites warriors and not human kids that can morph.

This one not only deals with being odds as the kids find some weaknesses about the Yeerks and how they depend on Earth to provision the mother ship but also with the consequences of not being able to come out of morphing in time and living as an animal permanently, since Tobias finds himself wondering if he's human anymore and gives into his hawk instict and mind. Reading about his struggles and how the relationships between the gang help him realize he's human not matter what his exterior shape might be was quite heartbreaking! He loves flying, he loves being free but it's like a case of "careful what you wish for" cause he misses all the things that he took for granted before.

The confrontation with Visser Three here is in an even bigger scale and the Animorphs really dealt with some close calls. I really loved this one and I cannot wait to read book 4 now! Well deserved 4 stars for this one!

View all my reviews
Publicado por Pili en 1:45 AM