Once again I'm dusting off the blog to share my love for a book and an author that is in my auto-buy list!

I'm a big bad of reading books with the playlist that either inspired the writing or that was chosen by the author because it's what fits best the moments in the book!

So today we have Paula here to tell us a bit more about the songs she chose for Ferocious! I have created a Spotify playlist that you can check out in the link below or check the YouTube videos below!


When I create a playlist, I “watch” the book like it’s a movie in my head and select songs that fit individual scenes. I also try to find songs that match the tone of the story. Like Vicarious, Ferocious is an edgy, high-tech story with a lot of action and dark emotions. I definitely tapped into my love of 90s and early 00s grunge and alternative music when making this list, as well as some newer songs with that same gritty flavor. In case you don’t use Spotify, I have linked to official licensed (AKA non-pirated) YouTube videos. Because they’re licensed, most of them have ads, but instead of thinking about how ads suck, try to think of it like ads are making it possible for these content creators to actually be paid for their work. You would want to be paid for your work, right? I hope you enjoy :)

300 VIOLIN ORCHESTRA BY JORGE QUINTERO
I’m starting off with this awesome tune because I think it would make the best background for a trailer. It’s got the perfect mix of music to encapsulate both action and romance scenes and does a good job of putting the reader in the right mood for Ferocious.

CENTURIES (GAZZO REMIX) BY FALL OUT BOY
I always include a song I imagine playing before the “book movie” actually starts, which in this case is the Gazzo remix of Centuries. I like the remix because it’s slower and because some of the electronic parts give the song a bit of an Asian feel. This song also encapsulates Winter’s state of mind as she embarks upon a mission of vengeance that she’s not expecting to survive.

FOR YOU BY STAINED
The book starts right where Vicarious ends, with Winter making a choice to take the MetroLink train toward the airport, to seek revenge against the man she knows is responsible for her sister’s death. She’s very upset because of things that have happened with Gideon, and this song captures the rage and despair she’s feeling as the story begins.

BOTHER BY STONE SOUR
Later the same day, Winter goes to a hotel room where she plays a ViSE recording from Gideon. It gives her needed information but also calls forth a lot of memories. Her emotions overwhelm her for a bit, and I thought immediately of this haunting, emotional song.

LAST RESORT BY PAPA ROACH
Later in the hotel room, Winter pulls out her throwing knives and starts practicing with them, throwing them at her mattress, over and over until she starts to feel calm again. This song captures all of the anger and helplessness she’s feeling in that scene.

KILL A MAN BY RAGE AGAINST THE MACHINE
When Winter gets to Los Angeles to search for her brother, one of the first things she does is, well, kill a man. Like the man she killed at the end of Vicarious, Winter doesn’t feel particularly guilty about this death, and this lack of remorse causes her to wonder if she’s some kind of monster.

MAMA BY EXO
One of the first things Winter and Jesse do in Seoul in go to Namdaemun Market for supplies. While they’re shopping, Winter sees a girl she thinks is spying on them and she chases this girl down the streets of Seoul. Mama is a fast-paced fun song that feels like it would work with a chase scene. Also, you should click this link just to watch the rather incredible animated beginning to this K-Pop video.

THIS MOMENT WE OWN IT BY 2 CHAINZ AND WIZ KHALIFA
In Seoul, Sebastian “Baz” Faber helps Winter with her plans to track down her brother and infiltrate UsuMed. One of those plans involves the two of them riding a motorcycle through the darkened streets of Seoul. This upbeat tune feels like the perfect complement to that scene.

BAD BLOOD BY TAYLOR SWIFT
I’m not really into pop (country?) music so I don’t follow Taylor Swift, but I heard this song at the gym and I thought it was catchy. The rest of this playlist is pretty dark, so this song is here to lighten things up during the scene when Jesse and Winter practice sparring on the rooftop. They’ve still got some issues they haven’t really addressed with each other and they work them out a little while they’re “fighting.”

HEAVY BY LINKIN PARK FEATURING KIIARA
“I'm holding on. Why is everything so heavy? Holding on. So much more than I can carry.” Heavy is a great song to describe Winter thinking about her mental illness at several different points throughout the book. RIP, Chester. You and your music made a lot of people stronger <3 nbsp="" p="">
NEVER TOO LATE BY 3 DAYS GRACE
Halfway through the book Baz forces Winter to confront just how serious her mental illness really is. Overwhelmed by what she learns, she flees to the rooftop of the building and considers jumping. After all, can someone like her even be fixed? Can she ever really live a normal life? Winter isn’t sure, but Jesse comes to find her and talks her literally down from her ledge.

RENEGADES BY X AMBASSADORS
Winter and Jesse don’t get a lot of time for romance in this book because she’s dealing with more serious issues and emotions. But there’s one night when Winter decides to take Jesse someplace special in the city. There, for a couple of hours, they forget about danger and revenge and just embrace each other’s company. I hear this song when they’re looking at the love locks and playing in the snow.

45 BY SHINEDOWN
Near the end of the book, Winter is literally staring down the barrel of a gun, knowing that she can shoot someone, but if she does then she’ll probably die too. It’s a struggle for her and she goes through several different emotions during this moment, all of which are captured by this song.

BLACK HOLE SUN BY SOUNDGARDEN
Winter and Jesse escape UsuMed and end up spending the night outside in the freezing cold. They’re safe for the moment but Winter is worried about her brother and Baz, so she’s exhausted and sad. Kind
of like the way the world was exhausted and sad after hearing about Chris Cornell’s death. RIP, Chris. “No one sings like you anymore.”

RUN BY SNOW PATROL
Winter and Jesse eventually end up on Jeju Island. They’re staying in a hotel waiting for things to calm down after what happened at UsuMed before trying to return to the U.S. Winter is also doing a lot of thinking—about herself and her illness and her feelings for Jesse, trying to decide if she can reconcile all of those things or if she’s going to have to let Jesse go.

STOP FOR A MINUTE BY KEANE AND K’NAAN
The last song on my playlist is always the song I imagine playing as the credits to my “book movie” are rolling. I picked this song because it encompasses Winter’s frame of mind throughout the novel, and also because it’s more uplifting than the rest of the playlist, hinting that happier things are ahead for the main characters.

I hope you enjoyed my FEROCIOUS playlist :) Wanna check out the one I made for VICARIOUS? Click here. Are you totally new to this series? I’m giving away a VICARIOUS paperback (INT) on Twitter from 8/29 to 8/31. 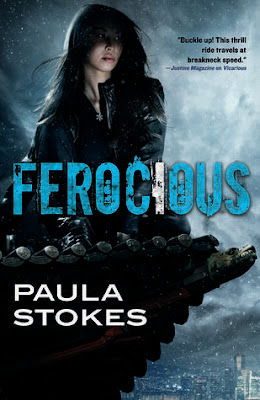 When Winter Kim finds out that her sister is dead and that she has a brother she never knew about, only two things matter―finding what’s left of her family and killing the man who destroyed her life. Her mission leads her from St. Louis to Los Angeles back to South Korea, where she grew up.

Things get increasingly dangerous once Winter arrives in Seoul. Aided by her friends Jesse and Sebastian, Winter attempts to infiltrate an international corporation to get close to her target, a nefarious businessman named Kyung. But keeping her last remaining loved ones out of the line of fire proves difficult, and when all seems to be lost, Winter must face one last devastating decision: is revenge worth sacrificing everything for? Or can she find a spark of hope in the darkness that threatens to engulf her? 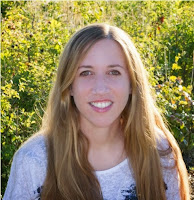 Paula Stokes is a mental health nurse and the author of several novels, most recently Ferocious and This is How it Happened. Her writing has been translated into eleven foreign languages. Paula loves kayaking, hiking, reading, and seeking out new adventures in faraway lands. She also loves interacting with readers.