Hi there! How's this new Monday going? I had to work morning shift, but even if I don't like the getting up early, it means I have the whole evening off!
For this Mark This Book Monday I wanna share another book series by Charlaine Harris, the Harper Connelly Mysteries! It's a 4 book series:
- Grave Sight
- Grave Surprise
- An Ice Cold Grave
- Grave Secret 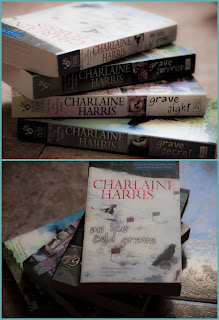 The main character of this series is Harper Connelly, a young woman of 24 that was hit by lightning at 15, and since that day can feel where a dead body is, and once found can see from the dead's perspective what happened to them in the hours leading to their death and how they died. But since it's seen from the perspective of the dead person, you won't see who killed them in the case of a murder, unless the victim knew their murdered or saw them. Harper travels with her step-brother Tolliver, who is not a blood relative, since Harper's mom married Tolliver's dad when they were in their early teens. Their family life was very complicated since their parents were addicts so the kids had to take care of each other and of the two girls born from that marriage.
The books follow the adventures and travels of Harper & Tolliver around the US, since they are hired as consultants to find dead people and what happened to them, Harper being the one that finds them via some sort of buzzing she feels, and Tolliver as his "manager", helper, bodyguard and general helper. We follow their relationship, and also how Harper hopes to eventually find out what happened to Cameron, her sister that disappeared at 18, when she was coming back from HS.
The full story unfolds along the 4 books, and comes full circle and closes down on the last book, Grave Secret. Very quick reads, with bits of supernatural and more bits of mystery. Very recommended!