Friday Feature: Rocky The Zombie's Pirates for a b-day theme!

I'm not feeling particularly reflective today, I've been rather more productive! I got up early for a day off, at 8 am to go to the spa for a Chocotherapy treatment at 9 (goodness, it was absolutely amazing! I could have eaten myself!), so when I got home, I had a lot of time ahead of myself, and thought that I felt like baking! So I made a batch of carrot cake cupcakes with the recipe for the Carrot Cake from the Primrose Bakery Cookbook and also, a batch of savoury cupcakes from Alma's Cupcakes blog: Brie & Dried Figs Cupcakes, for tomorrow's dinner. They're in a tupperware now, so they'll be fresh and ready to be eaten as starters for NYE's dinner! I work 3 to 10 pm tomorrow, and I wouldn't have had the time to make them otherwise.

My, am I a bit verbose today? Ok, time I get on with what this blog entry should be about! Friday Feature to show off how to incorporate handmade into birthday themes!

When I went to India this latest time, in October it was RD's b-day, and the theme for his b-day party was Pirates! His fave cartoons are "Jake And the Neverland Pirates" so it wasn't too surprising that RD would choose pirates as theme. As I told my G's sister, if I would have know that with a bit of advance, I could have got invites and decorations from On Cupcake Moon, cause Deb has a great pirate theme! And she can make the invites, the banners, the thank you cards, cupcake wrappers, cupcake toppers and even centerpieces, confetti and napkin rings! Since we didn't, we had to make do with what we could find in two party shops in Gurgaon.

We found quite a loot, including some gold doubloons, pirate balloons, cups, plates and some tiny things as favours/return gifts... aaand some pirate patches for the adults! Aaaaarrr! Also, since both G & me had some very pirate-y t-shirts from Rocky The Zombie, that'd be our uniform for the party! 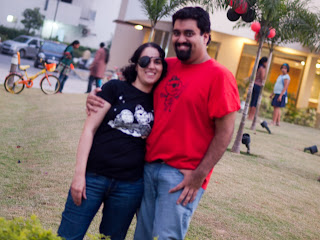 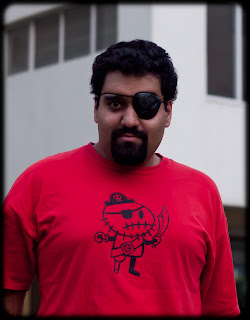 We also had to plan some activities for all the kiddos that would be attending RD's b-day, and since the kids would be from 2-3 year-old toddlers to 10 year old older kids, we decided a treasure hunt would be great, and also some colouring. I thought that the Rocky The Zombie pirate designs would be great for the kids to colour, so I asked Rhi if she wouldn't mind sending them over, so we made a few copies, along with some images of the pirates from Jake & the Neverland Pirates.


Since on the day of the b-day G & me arrived late, when the party was under way, I didn't get any shots of the kids doing the colouring, but I'm thinking that I'd love to get any of the kids in G's family a colouring book all made out of Rocky The Zombie designs! 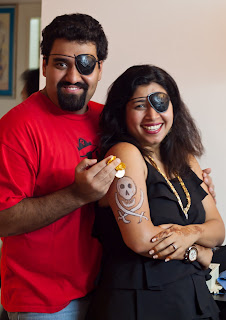 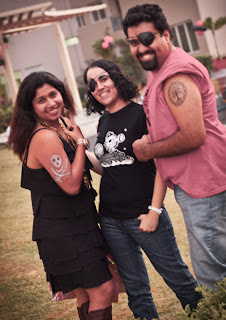 All in all, the party was a success, though I seriously think I won't invite as many kiddos if we ever have kids and make b-day parties for them... 30 kiddos was crazy to manage!