What book am I very eagerly awaiting this week? The Star Thief by Jamie Grey! 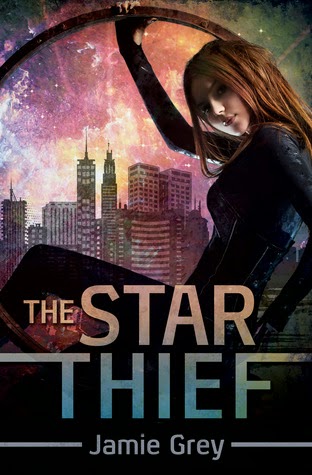 "She might only be twenty-three, but Renna Carrizal is the most notorious thief in the galaxy. There’s just one problem – all she wants is to get the frak out of the business.

But when Renna rescues an injured boy from the warehouse she’s casing, she finds herself on the run from the mob instead of enjoying retirement on a garden world. Turns out, the kid was a plant to lead her to MYTH, a top-secret galactic protection agency.

MYTH needs Renna’s special skills, and they make her an offer she can’t refuse – unless she'd like to spend the rest of her life on a prison ship. To make sure she does her job they shackle her with a MYTH watchdog, the handsome but arrogant Captain Finn.

A former mercenary-turned-galactic-hero, Finn happens to have his own dirty secrets. Secrets that Renna wouldn’t mind uncovering for herself. Together, they discover an experiment to develop illegal cybernetics that will create an unstoppable army. The intended target? The human star fleet.

Now Renna must use her skills as the Star Thief to pull off the biggest job of her career – saving the galaxy. And herself."

Why am I eagerly awaiting The Star Thief by Jamie Grey? Well, it is science fiction and I am a huge science fiction lover! It's also NA and I think it'll be a great idea to read this one to read more NA. And frankly, after reading Jamie's debut (Ultraviolet Catastrophe) I'm quite excited to read anything by her!