This week's Saturday Pages comes a lil later than usual because I finished this book so late last night that I was too tired to write the review upon finishing it and I needed to let the whole book sink in a bit.

It is February's Alyssa Recommends book and since that is one of the categories in my 105 Challenge, it is counted towards it, as well as my 2015 Debut Author Challenge, since it was a 2014 debut. 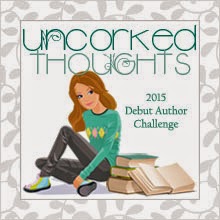 
Pointe was one of my Alyssa Recommends books, and this month I felt like reading it, because I've been more drawn to anything and everything with ballet references as of late.

Theo is a normal teenager on the surface, dedicate to her love for ballet and doing well enough at school, going out to parties with her friends, and with one or two not so unhealthy habits. But very soon we see there's so much more in the past that we don't know, and the façade of Theo doing well starts crumbling once a ground-shaking event happens, her best friend Dononvan who was abducted/kidnapped 4 years ago, when they both were 13, has been found and returned home.

With Donovan's return and the revelation of who his captor was, Theo has her world shaken to the foundation, and she finds herself slipping to an already known spiral for her, the same one she fell into 4 years ago, when her then boyfriend left without a trace and her best friend disappeared.

This book deals with a lot of tough subjects and doesn't pull any punches when it comes to bad language, eating disorders, sexual relationships, drug usage, rape and abuse. It also has positive relationships with friends and parents, safe environments and a main character that undergoes a lot of growth all through the book.

Theo is not a perfect character by any means, she has many unresolved issues and the one that requires more work is the fact that she doesn't see herself as a victim, even if her eating disorder was a desperate bid for control when she felt she had none, she always kept her secret and she refused to think that there was anything wrong with it, and once it really sinked in for me what had been going on between her and her "boyfriend"... I felt like I had been punched!

This book is definitely gritty and shows us a face that might one to ignore, the fact that teenagers do have sex, that even regular good teenagers that do have a drive and love for something so demanding like ballet can still do drugs occasionally, can be at risk in ways their parents can't suspect no matter how they try to protect them, and one of the best lessons from this book is how Theo's parents may not know what is going on, but they do take action, they are there for her daughter and remind her of that, they're not oblivious, but if you don't feel like you need help or if you don't know if you deserve the help... you are the one that will need to take the first step and you need to confide in someone at some point.

Despite what a tough book this is, it ends with a lot of hope, with Theo being the one to ask for help once she realizes she needs it, Theo learning to be strong enough on her own and not expecting someone else's appreciation to make her special. She decides that no one can heal her unless she does it herself, and that is a wonderful message of hope.

A brilliant debut, so tough, beautiful and poignant, very well deserved of 4 to 4.5 stars for sure! I'll be looking forward for more books from this author!