Friday at last! And this week also means a weekend off for me!

For this week's Friday Reads I've got a book that I've finally got to read, that has been on my TBR pile since August of last year and that was one of my most anticipated debuts of 2014. I pushed it back for some reason or other and now I finally got to read it! 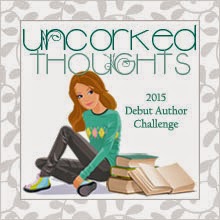 Gates of Thread and Stone by Lori M. Lee


From the moment I heard about this book I was extremely excited about it, then saw the cover and was in love and then I got a signed copy and flailed all over the place... and then it took me months to finally read it, and boy am I kicking myself for not having read it before!

I went into this book expecting a fantasy book but I got an added extra bonus of having some uniquely postapocalyptic added touches to it. Unique because the world was already a fantasy world before the catastrophe happened and it continues to be so afterwards.

Kai, our main character, is an orphan that was taken in by Reev, her brother in any way that counts but blood. I loved how their relationship, of one caring for the other and trying to protect each other, is what moved the plot along. It's quite unusual that a familial relationship would be the stronger motivator for a character, instead of the romantic one.

She is determined to get her brother back, and to rescue him she'd do anything. Use her secret & hidden ability, start a dangerous adventure and get herself infiltrated in the most dangerous place in the city. She's strong, determined a lil rash but not overly so and she has so much trust and faith in her brother that you sometimes worry about her, in case she is disappointed.

That the romantic relationship is not the one driving the main character doesn't mean there isn't one here, because there is, and one that I was a huge fan of from the start. Avan and Kai are friends, there is attraction and butterflies in the stomach and something more going on, but it's a fantastic slow burn and Kai is always putting her search for Reev first. So much that poor Avan feels like a second fiddle but remains with her protecting her and helping her every moment.

The mythology that we get to discover in this book is once again at the same time unique and familiar. There's some limited magic left after the fight that led to the catastrophe and there are some extremely powerful beings that are not exactly gods but are godlike, The Infinite. I cannot wait to find out more about them, their past and even more after the information that we got at the ending of the book!

About that ending... well it was quite explosive with revelations and fights and Kai kicking arse and refusing to be manipulated and quite a bit of heartbreak and a shock or two, BUT it doesn't end with a cliffhanger! We do want to know more about what comes next but aren't left crushed and wailing for the next book, which for me it's always a plus! Very well deserved 4 stars for this one!