Since I've been re-reading quite a bit this year for a change and I've decided that I'll be using my Thursday Thoughts to talk about those books I've re-read (most of them in preparation for the next or final book in a series) and then a slightly more regular review for the next/final book.

I adored Red Rising the first time I read it, I loved the build up of the Reds, their culture and the transformation. But on the re-read, I guess that because I knew what was coming, I felt like that was a bit slow... I must confess that I started loving the book as much as I did the first time the moment they got to the Institute. The moment the plotting, warfare and bloodshed started, I was 100% on board and in love with the book again!

I'm not sure what that might say about me, but yes, the most violent parts of the book is what made me love it again. Darrow's mistakes and triumphs and the way he discovered how he could care for those he was supposed to hate, and how he made friends and brothers between the Golds. Meeting Pax and Sevro and Mustang and all the rest... Gave me a different appreciation of the personalities of them all. Must confess that I thought I remembered more and/or better but as it happens I seemed to have forgotten quite a bit or to be more accurate I missremembered a lot! I kept thinking something should be happening right about now, and I had forgotten other stuff that had to happen first. In the end I absolutely loved it again and give it once again the full 5 stars!

Re-reading Golden Son was similar to re-reading Red Rising in the fact that I had forgotten some shocks, forgotten some scenes and kept misremembering some stuff (thinking something happened before it actually did), but since the bloodshed, conflict and warfare are peppered more all over the book, my blood thirsty self enjoyed the book more from the very beginning, without as many lulls as Red Rising.

I loved how Darrow kept getting back up after looking like he was beaten down, and how he kept surprising everyone (including me, for the second time!). I loved getting to meet the Stained again and loved seeing the different mythologies and cultures added to the mix. That is actually one of my favourite parts of the series, the way the Roman and Norse mythologies and cultures are part of the culture of this world, as well as the Irish feeling of the Reds.

Once again, I adored the book, it destroyed me emotionally becayse clearly no one is really safe and the deaths affected me quite a lot once again! I got pissed a bit more than the first time with some of the characters, and some of the betrayals hurt a lot more, because despite Darrow's flaws and his tendency to keep his friends at arms' lenght, I feel every attack to him as a personal attack to me! 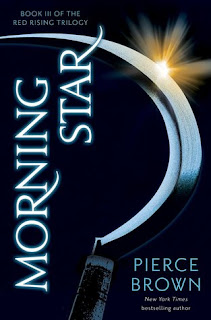 After the re-reads, I was very well prepared having everything fresh in mind, and it really was the best idea ever. After the utterly horrible cliffhanger that was the ending of Golden Son, I started reading Morning Star full of trepidation.

As usual, Pierce Brown did NOT disappoint. There is plenty of politic manouvers, bloodshed, warfare and twists here and there and everywhere I'd even say!

It's gonna be really difficult to review this book avoiding spoilers for it and for the previous ones and that's gonna make this review so very vague!

Darrow never had an easy path, but in the beginning of Morning Star, things got even harder! After his wake up call and his confrontation with all the fears he had avoided, his character was even  better and more interesting. Everything changes in this book, quite a few times over. The Sons of Ares as an organization has changed, many characters have changed even if not fundamentally, just continued progressing and evolving.

There were a pair of occasions when I wanted to throw the book at Pierce Brown's head and I would have never forgiven him if certain events had really stick and were not permanent. Good thing both were false alarms and surprising plot twists that I never saw coming! I don't know if Mr Brown is that good or I was particularly thick while reading!

Morning Star will put you through the full range of emotions, from fear to horror to hope to anger and rage to happiness and excitement and concern and excitement and all over again! It's the right way to end a trilogy, making the odds even higher, turning up the tension up a notch every few chapters and having surprises and aces up their papery sleeves. The ending was both satisfactory as it was but also open enough to give us space to imagine what might come after.

Once again, very much deserved 5 stars, even if there were a few little things that I didn't agree 100%, but nothing that would change my rating.
Publicado por Pili en 12:00 PM