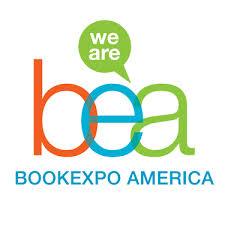 Finally, my recap of my BEA 2016 trip is here!! It's been a few days in the making but BEA brain is a thing and if we add my vacation time, the blogging slump and coming back from vacation to real life and work... Well, it was bound to take a while!

Last year I did 3 recaps, one per day and this year it'll be the same format again! After trying to do all three days in one post and looking at the lenght of it and my overly verbose self... three posts it is!

All three of them filled to the brim with photos and my overly enthusiastic rambling about my amazing room mates, all the awesome peeps that I met, the brilliant authors I was lucky enough to meet and of course LE BOOKS!

On Tuesday I left Wisconsin where I had been staying with friends of mine to ride a bus to Chicago. Once I arrived at the hotel I met most of my bloggy friends and room mates doing the check-in already, which meant loads of squealing and hugging and happy noises to the surprise and moderate amusement of the Hyatt staff.

I've said it before and I will say it time and again, the best thing about BEA is always the people! I adore all my roomies and without them BEA wouldn't be a a tenth of how awesome it is! If you are planning to do BEA, make sure you do it with friends! I adore my BEA Duck Squad and I cannot wait till I can meet them all again!! 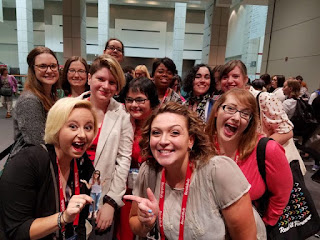 After getting settled in the rooms and a few lil hiccups, we all went on a walk to go shopping at Target. Yes, I'm always willing to go along for all that but I had no idea why we were going there, but people needed to buy some snacks and water... and we ended up filling our cart with that AND loads of booze... Adulting hard right there! Given that I had already packed snacks in advance, I settled for some water, boring one that I am. 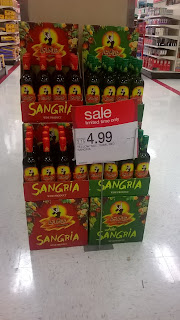 I found this stand for sangría and that price hilarious! 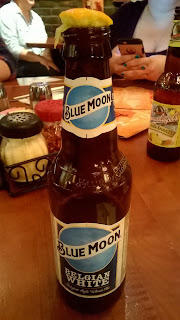 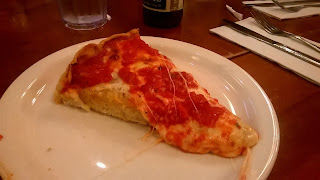 Then back to the hotel room where we left Katie locked out of the room without realizing it... the stupid bolt fell a lil to the side and the door couldn't be open! Thank goodness for all of us rooming in the same floor!

Wednesday started with me waking up at ungodly hours (yaaaay jet lag!), trying to get some more sleep, failing, getting up and doing some yoga and then going for a Blogger breakfast at Yolk organized by the lovely Wendy from Book Scents where I had Potato Pancakes that were super yummy but couldn't eat them all (Americans, you have huge portions!!). From there we went to get our badges and then sat on the line to wait for the floor to open. The waiting time is always good to plan and see what drops might be and study the map to see where all the booths you want to visit are in relation to each other and , since I had no signings on my schedule for Wed. 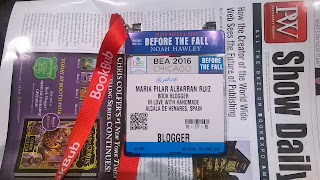 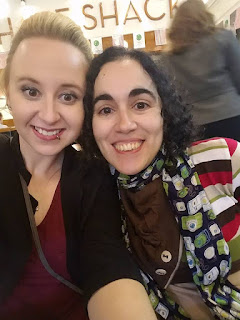 As it happened there was a drop for Double Down by Gwenda Bond as soon as the doors opened so I went straight there! Then roaming around the booths to get their schedules and I ended up grabbing a few books that freed my Thursday schedule! I was quite lucky to get The Forgetting because right before the drop I had asked about it at the booth and they had no idea if there was gonna be a drop (WTF?!), also cheated a lil bit at the "roll the dice" game at Hachette because I really just wanted Blood For Blood, got my so very awaited A Shadow Bright and Burning (Penguin drop!) and asked about Ghostly Echoes at the booth and was so very lucky to be handed one copy! Harper's drop for Aerie was a bit of a mess, but no harm done (and they learnt from the experience!).

Also it was great that I met so many of my bloggy friends like Jenny, Mel, Hafsah & Asma, and many more! 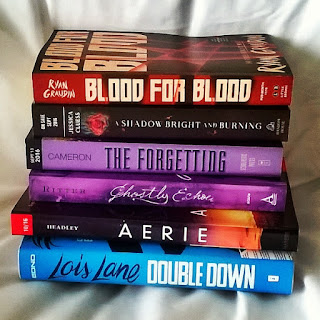 After all the excitement of the first day that wasn't as laid back as I was expecting but that was oh so very productive we all went for dinner at Shake Shack and oh boy CHEESE FRIES!! I understand why all my friends were so keen on it! Also, foreigner speaking here, those buzzers they give you so you can pick up your order when it's ready? Such a good idea! 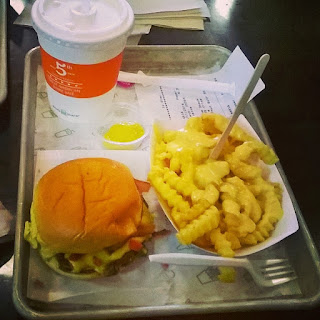 Then after the food it was another trip to another Target, but on our way there we stopped at a souvenir store so I could get some shopping done and then we took an Uber back to the hotel and soon to bed for me because I was pretty much beaten and jet lag is a bitch!
Publicado por Pili en 2:00 PM