Friday Reads: A Ring of Endless Light by Madeleine L'Engle!!

I shall be putting the blog on hiatus after this weekend, although there will still be some scheduled posts since I had some blog tours and interviews and posts that I agreed to do and I've already worked on them and have them ready so now I can stop worrying about my blog and focus only on worrying about my apartment, getting the damned keys already and pack for BEA!

Today, I have a late review to start this Friday Reads, because I'm talking about April's choice for The Midnight Garden's Classic MG & YA challenge! I was a bit late to start reading it because April truly got away from me! 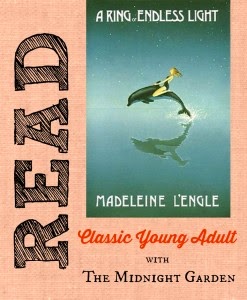 A Ring of Endless Light: The Austin Family Chronicles, Book 4 by Madeleine L'Engle


I finished reading this one on my last night shift at work and holy hell, was that a bad choice... If you’re wondering why it was a bad choice for me to read this one at work? Well, I was feeling pretty down with all the death and with Vicky’s reaction to it all and did I mention all the death and accidents? A real bummer to go and try to smile at my patients while I wake them at 6 am for meds and blood tests.

Well, I give this one 4 stars, even if I have some serious issues with some parts of the book, but Vicky being a rather wonderful almost 16 year old girl, that felt realistic and rather sensible even being a dreamer and poet and one that didn’t feel like she had to do or give in or feel guilty-ed (not a word, I know, forgive me, I slept lil today!) into doing what any of the boys would want her to do, from Zachary pushing her (for goodness sake, HE’S BLOODY 20!?!), to Leo wanting to be more than she wanted and Vicky being very clear that she just wanted to be friends, and Adam… Adam pushing her away and also needing her and Vicky being mature enough to know she what she wanted but also respecting the boundaries as long as she was treated as someone mature enough to talk to and not a child to be condescending. I was very glad to see that Vicky was more into thinking than simply swooning…

But what really made me give this book the 4 stars was the dolphins! All the dolphin interactions, the swimming, the mind-melding/telepathy with them, Norberta, Basil, baby dolphin… and everything about them really! I adore every interaction, every way in which dolphins are shown as interesting and intelligent creatures with perhaps a different intelligence & understanding from ours. I just couldn’t help but hum “So long and thanks for all the fish” sometimes in my head, and my Hitchhikers fangirl was squaling a bit at all the dolphin-ness. I need to go swimming with dolphins somehow, it’s always been on the bucket list, but boy have I been reminded of HOW MUCH I WANT TO!!

The dolphins also bring me to another favourite part of the book, because I loved how characters discuss and talk about why’s, how’s and science and philosophy and how to figure out your questions about life, the universe and everything (sorry, had to do it, again) and how to figure out yourself. Vicky’s demands of being treated like mature enough would have been rather more annoying if her main demand was caused because she wanted to be treated as someone that can talk about complex issues and will bother to learn and understand and be open enough to new ideas, not just as “someone old enough to kiss” which unfortunately is more the focus on more recent YA’s.

I really liked the Austins, even if I felt some of the Bible talk and quoting and discussions about God felt a lil preachy at times for me, but never too much to make me want to stop reading, only a bit of frowning now and then. And they were what I call the good kind of Christians, if you allow me to use that qualifier. They are kind, inclusive, eager to talk and learn and to help people and not think they are better than others or have all the answers. A bit preachy or not, they’re a family I probably wouldn’t mind spending time with, if I can duck having St Agustin quoted at me! ;)

Going back to the three boys… if this would have been another book I would have totally said “hell no!” but it was done so very well! More in a way of exploring friendships and attraction and relationships, and not simple indecision back and forth of declarations of love. Vicky is clear with them all and the boys are more or less clear too. And quite frankly, the only one actively trying to woo her and taking her on dates is Zachary, since Leo and her seem to be hanging out as friends mostly, even if he tries to push the boundaries and Vicky is clear and upfront with him all the time. And Adam… well, he’s the one with the most genuine connection and that spend more time with Vicky talking and interacting with the least “date” scenario, and he ends up being the best option, even with the age difference. I was shocked and rather appalled when Zachary was revealed to be 20!! O_o I felt bad about Zachary but I was bothered that he was made such a “broken bad boy” cliché. And that the non-Christian option was represented so cartoony, and with the most shallow characters, like Zachary and his dad.

And last but clearly not least given the importance and how overwhelmingly present the theme was all over the book: death. It made me wonder if the author had suffered some loss recently when she was writing? Because sometimes it felt like a way for her to go through the stages of grief and how to get yourself together! I feel like the illness and clearly upcoming death of Grandfather and the dolphin baby would have been rather enough, but there’s so much of it! Yes, I know quite well that life can suck like that sometimes, but oh boy! The way Grandfather’s illness progression and treatment and deterioration and how that affects the family as a whole and each one of the differently was done brilliantly, and that would have been more than message enough, I feel. Some of the added deaths felt a bit like kicking us in the gut when we were already down, you know? I am someone used to death surrounding her and it took me a while to kick the gloominess after finishing the book!

Still, this is a very recommended book for teens to try and make them stop and think about life, and for adults too, because we all might need a reminder now and then. And dolphins make everything better!

View all my reviews
Publicado por Pili en 11:00 AM