Mark This Book Monday: The Luckiest Girl by Beverly Cleary!!

A new week starts, and hopefully one full of good news! It's also the week of Xmas, so Happy Holidays to you all! We won't be celebrating too much over here in the family, but please keep your fingers crossed for me while I continue to try and get my apartment!

For this Mark This Book Monday I have another classic YA book that will be my 8th, allowing me to count the Classic YA & MG Challenge & readalong at The Midnight Garden as completed and not flunked! This one was March's book so I'm a bit late to the discussion, but better late than never! 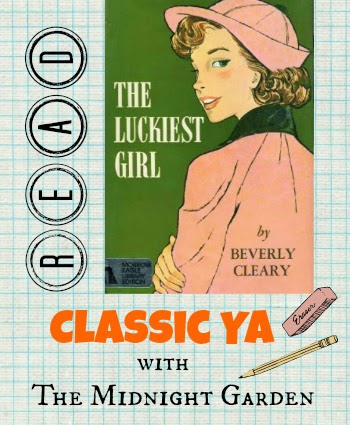 The Luckiest Girl by Beverly Cleary


This is another of those classics that I never had heard of before and that I missed originally on the Classics challenge at The Midnight Garden when I was the readalong book in March.

But wanting to complete the challenge and not fail it, I decided I needed to read a book that wasn't too long, and went for this one!

Shelley was a very sweet teenager but her mental processes being so taken up with boys did manage to annoy me on occasion. But the moment she started arguing with her mum about the slick vs the raincoat and reacted by destroying the roses... I decided that I liked her more! I was never too explosive as a teenager but I could really understand the frustration and the differences between mother and daughter. I still have them today with my own mother, but I am the kind that doesn't really argue but end up doing whatever I want... ;)

Shelley moves to California for a school year with her mum's college roommate, which seems like a fantastic adventure for a sixteen year old girl that had never travelled on her own or spent time away from home. I really loved that she appreciated everything and looked at her trip and all the differences as wondrous instead of comparing them and finding them lacking with what was "back home". Her enthusiasm popped from the page and was quite contagious too.

Seeing San Sebastian and the new school through her eyes was quite refreshing, and although her obsession with Phil was a bit eye-rolling-inducing, she felt very genuinely a teenager, because at some point and in varied degrees... we were all obsessed with boys (or girls).

I loved how Shelley grew and learnt some lessons during the course of the book, how she became to understand herself better seeing Katie and her reactions, and how that gave her perspective to her past and current actions, making her understand her mother better.

Shelley also realized why she felt like she got tired of Jack and why she didn't feel like things were working out with her dream boy in San Sebastian and realizes that crushes when you don't have many things in common can get pretty awkward, and sometimes the guy you think of as a friend and enjoy sharing things with is the one you can be with and love in the end.

What I found extremely sweet and that dated this story more than anything else was the way Shelley thought about the boys and the relationships, how it was all "going steady" and there were so few kisses and dates were more doing things together and the boys going into the house to meet the parents (or responsible adults) compared to what contemporary books of today show, with more absent parents, more uninformed parents and loads more kissing! ;)

A very sweet read that I ended up liking more than I expected at first. 3.5 to 4 stars for thi one.