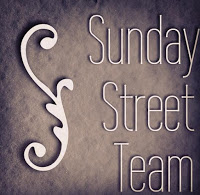 
May had some really awesome authors and I'm very happy helping promote a book I am extremely excited for (and cannot wait to get my hands on!) Outrun the Moon by Stacey Lee!

I have a fantastic guest post by Stacey Lee to share with you all, as well as 3 giveaways (so don't forget to scroll down for those!) but first let me tell you about book & author!! 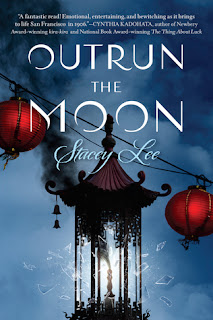 Outrun The Moon by Stacey Lee

San Francisco, 1906: Fifteen-year-old Mercy Wong is determined to break from the poverty in Chinatown, and an education at St. Clare’s School for Girls is her best hope. Although St. Clare’s is off-limits to all but the wealthiest white girls, Mercy gains admittance through a mix of cunning and a little bribery, only to discover that getting in was the easiest part. Not to be undone by a bunch of spoiled heiresses, Mercy stands strong—until disaster strikes.

On April 18, an historic earthquake rocks San Francisco, destroying Mercy’s home and school. With martial law in effect, she is forced to wait with her classmates for their families in a temporary park encampment. Mercy can't sit by while they wait for the Army to bring help. Fires might rage, and the city may be in shambles, yet Mercy still has the 'bossy' cheeks that mark her as someone who gets things done. But what can one teenaged girl do to heal so many suffering in her broken city? 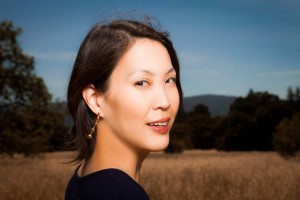 Stacey Lee is a fourth generation Californian with roots in San Francisco Chinatown. Born in Southern California, she graduated from UCLA then got her law degree at UC Davis King Hall.

She has lots of experience with earthquakes, having skinned her knees more times than she wants to remember diving under tables. One day she hopes to own a hypoallergenic horse and live by the sea. See what she's up to on Twitter & Instagram: @staceyleeauthor.

- San Francisco, a multicultural haven of a city: Myth or reality historically speaking?


Reality! San Francisco was the main Pacific gateway into the US, as the entrance to one of the best harbors. The first settlers were Native Americans, the Ohlone Indians. Then the Spanish sailed in, establishing military settlements, and religious ones for converting the Native Americans to Catholicism. Curiosity over this new land and hunger for a piece of the pie led to more explorations by the French, the English, and the Russians, but eventually the area became part of Mexico after its independence from Spain.

Not long after independence, gold was discovered, and immigrants from all over the world headed for the gold mines of California, so gold-hungry that often sailors would just abandon their boats in the harbor because no one wanted to make the return trip home. The first significant wave of Chinese immigrants arrived during this Gold Rush of 1849.

By the time of OUTRUN THE MOON (1906), San Francisco was truly a diverse city, though folks tended lived in their own neighborhoods (not always by choice, as with the Chinese). The earthquake shook up that dynamic, at least temporarily.

There are three fantastic giveaways that you can enter!!