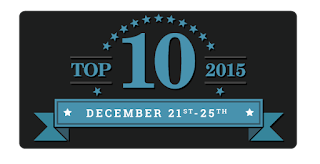 Once again I'm very happy to join one more year in the Top 10 of 2015 week hosted by Rachel from Reading YA Rocks, Jamie from Two Chicks On Books, Mindy from Magical Urban Fantasy Reads and Nancy of Tales of A Ravenous Reader.

Today we're gonna be talking about all those swoon-worthy guys we love! To make it slightly easier to pick and choose the guys must be from book published in 2015 that we've read in 2015!

SmallvilleGuy from Lois Lane: Fall Out by Gwenda Bond - We only get to meet him through is IM conversations with Lois, but I simply loved what we saw of him and how much he cared for Lois.

Kaz from Six of Crows by Leigh Bardugo - Oh dear Kaz... broken in many guys and quite the opposite of a nice guy, but I totally fell head over heels for him!!


Jason Moros from Fated by Sarah Fine - Oh boy, Jason Moros! A dangerous foe and dangerously sexy not-exactly-a-man... He wouldn't allow himself attachments, but when he does... when he does he doesn't give up and would go to hell for you!


Aedion from Queen of Shadows by Sarah J Maas - We finally get to meet Aedion properly and with his wit, sarcasm, Fae tendencies and cocky attitude, I was swooning even as I wanted to smack him in the head now and then!

Odysseus from Ungodly by Kendare Blake - I love this quick-witted, Goddess-loving rogue! He knew when to push and when to give Athena space, and I simply loved him!


Elias from An Ember in the Ashes by Sabaa Tahir - Elias is trying to be true to himself, run away from the cruelty and bloodthirst of an Empire he never wanted part of and he can still kick arse in the process. A good guy in a bad situation for sure!


Reyes Alexander Farrow from Eighth Grave After Dark by Darynda Jones - Reyes is the son of Satan (like he really is, not a figure of speech) and he is the damned sexiest alpha male ever, even if he sometimes goes to the arsepha side...


Tobiah Pierce from The Orphan Queen by Jodi Meadows - I was undecided about Tobiah for a good part of the book, but then he really proved himself as a very much worthy book boyfriend!


Simon Wolfgard from Vision in Silver by Anne Bishop - This is one of those book boyfriends that you know are not a good idea, but you cannot help it! Simon is one of the others, a wolf that can take human shape and is learning to also be a mix of wolf and human that is simply fantastic!


James Mycroft from Every Word by Ellie Marney - Oh boy, Mycroft is the kind of brilliant and passionate and broken that always manages to draw me in! All the swoons!

Aaaaand one special mention as an extra for Kaidan Rowe! He's always been a big book boyfriend candidate but getting his POV in the last book of the series: Sweet Temptation has been just swoontastic! Thank you Wendy Higgins for that!