Friday is here! And since I am on vacation I kinda needed the reminder because days kinda run into each other and I'm not sure what day of the week they are anymore!

I don't have any big plans for this weekend other than reading and packing for my London trip that starts on Monday!

As this week's Friday Reads I have a review of an ARC that is one of the few new books I read during September (which also means that I'm quite behind on my ARCs reading...) and since it's also a retelling of Peter Pan debut, it counts towards my 2015 Debut Author Challenge! 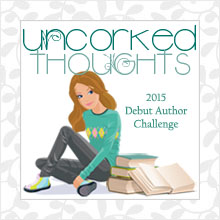 
I knew it... I knew the ending would destroy me. Brianna did a wonderful job of giving a new life to both Peter Pan and James Hook and gave a villain a story worth of being his own hero. *goes to stuff herself silly with cookies now*

This book had been in my wish list as one of the debuts to keep in mind, and after my very talented friend Sarah made her book trailer  SEE HERE and then I got super excited and requested it from NG as soon as I saw it there! Thank you so much to Spencer Hill Press for approving me!

Never Never is a fascinating story with a voice that change and progresses as the story does and grows as James does. The writing is very visual and it wraps you into the story with ease. Sometimes I was a bit confused because it seemed we switched from first person to third person for small periods of time and that was a bit disconcerting, but served also as a way to enhance the storytelling quality of the story.

Retellings aren't exactly my favourite thing to read, but when they are done from a different POV and even more if the POV is from the villain of the story... I'm all in! And Never Never succeeded in giving us a new perspective on not just James Hook but the entire Neverland story and of course, Peter Pan!

I've never read the original story (I know, I know...) so my only Peter Pan knowledge comes from two movies: the Disney version and Hook with a grown up Peter. Now reading Never Never made me think of how we sometimes lighten up tales that were darker in origin and I wonder if the original story also had this darker undertones.

Peter is an intriguing character, a forever child, one that has not grown to learn compassion or empathy and that is selfish and egotistical and doesn't see further that his own wants and needs. Even with a certain selective memory to forget what he doesn't like and no remorse for his choices. I feel like he is a mix of the worse qualities from a toddler and teenager mixed together!

We meet James Hook as a child and one that doesn't want to remain a child but wants to grow up, so him going to Neverland seemed like a bit of a doomed choice, one destined for unhappiness. He is fascinated by Peter Pan but he is never a Lost Boy, so he finds himself growing apart from Peter & the boy and growing up into a pirate, with an unhappy heart full of resentment.

He's not exactly the hero nor the villain of his own story, not really. He hates Peter Pan and not without reason, but he finds himself in a position with very limited choices and he doesn't always make the best ones either. He's such a nuanced character, full of hate, love, longing and remorse.

Tiger Lily is a much more present character that I ever saw in the movies and so glad of it, because she's a very strong female character that also has to make some really hard choices. Some that would even touch on the clash between destiny, purpose and free will.

The ending of the book can't be considered a surprise, given how it follows the original story, but after everything that we went through in the book it does pack quite the emotional punch!

A very much deserving 4 stars for this stunning debut! Looking forward to reading more from Brianna Shrum for sure!

And because I've kinda liked the idea of adding a song that matches the feel of the book or makes me think of one of the characters, I will add a song that has very much the same emotional vibe for me, specially the ending of the book!