Friday Reads: Firewalker by Josephine Angelini and The Girl with the Silver Eyes by Willo Davis Roberts!!

I've been reading loads as of late, which is great of course, but I've been really remiss at writing reviews, and now I have a backlog of reviews to write and publish, but hopefully I'll manage to sort that out!

I'm starting with two reviews for this week's Friday Reads! I'm having an ARC review that counts towards my ARC August goals first!


Last year I read and loved Trial by Fire, so getting my hands on an early copy of Firewalker was one of my top priorities at BEA, the fact that I met the author and got a signed ARC were one of my highlights of the event!

Firewalker starts pretty much where Trial of Fire left us, and so you might expect some spoilers for the first book in this review but I will try my best to avoid spoilers for this one.

Lily and Rowan are back in Lily's own universe and her own version of Salem, having escaped Lillian... more or less. Being back means having to deal with the consequences of her disappearance and having to explain a lot of things to her family and friends, the first one Rowan and her burns, even if her mum does help with everything in very unexpected ways.

But the respite of reality does not last long, and Lily find herself facing some really tough choices and keeping secrets from everyone, even from Rowan, which she knows is a very bad idea, but once started doesn't how to stop or explain.

Firewalker was a brilliant sequel because it takes us in a direction we really weren't expecting to go, with Lilly finding herself a new coven and being able to be who she really is with her family and friends.

We learn more about Lillian and her motivations for her despicable actions, and although we might still not agree with her genocide and killings, we do understand better her reasons and the fear behind what she's doing. Things stop being clearly black and white for Lily and for us, and she has to make her choices in what's clearly more in the grey spectrum and finds herself having to choose between the lesser of two evils. And she finds herself keeping more and more secrets, some with the power to break those she love.

But Lily proves that she's herself and not Lillian, no matter how she can understand the tough choices she made, and she finds herself trying to find an answer to the Woven to try and save Lillian's Salem and that reality from turning into a cinder world with her friends and some of her old allies, but not all of them.

Firewalker has plenty of new information, loads of unexpected twists and some hints at even more baffling reveals to come. Plenty of heartbreak and jarring revelations. The world building is expanded in many ways, the characters are challenged in different ways, the plot moves forward in unexpected ways and we are never sure what will happen next.

The ending was shocking, heartbreaking and a proper game changer and although I'm not a fan of cliffhangers, I have to say that Josephine Angelini really managed to left me both speechless and excited, shocked and intrigued and quite a bit shaken!


And then as my second Friday Reads review, I have August's book for The Midnight Garden Classic MG & YA challenge! 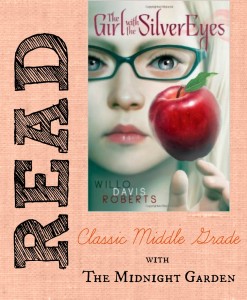 The Girl with the Silver Eyes by Willo Davis Roberts


This month I read the #tmgreadalong book on time and I really enjoyed it!
I keep on thinking how much I would have liked to have read this one as a young girl and how I would have dreamed that I could also move things with my mind, like Katie does.

Katie has just moved into a new place with her mum and she's having to adapt to the new place and living with her mother and a new place and new people. Something that might be hard for any kid, but Katie has never been a normal kid, and adults tend to be wary of her.

She finds herself dealing with unwanted babysitters, nice neighbours and others that are certified jerks and she makes some friends, and finds some acceptance to her oddity but still finds herself very much alone.

It was hard for me to read about how alone Katie really was, not able to confide in her mother or having her support, but instead feel like she was judged weird and held at arms lenght. She entertained herself and even if she tried to hide how she was "peculiar", she still felt like she shouldn't have to be ashamed of it.

I loved to see how resourceful she was once she found a hint of answers for her being different and how determined she was to finding someone else that would maybe be like her and would understand how she felt.

Seeing Katie use her powers for both good and mischief was a lot of fun, and I kept rooting for her to get rid of the babysitters and instead hang out with her neighbour, who would lend her books and was kind and understanding for a change. And once more silver eyes enter the fray, it was a lot of fun to see them understanding each other and working together.

It was quiter heartwarming seeing Katie's mum proving herself reliable and a better mother figure than appearances led us to believe at first, even if something dramatic had to happen to shake her into it.

All in all, a great read, both fun and with enough depth to hold its own well with younger and older readers alike! Well deserved 4 stars!