I am so excited to share with you guys the release day of A COLD LEGACY by Megan Shepherd and to share an excerpt of the book too!

If you haven’t yet heard about this one, the last book in the trilogy by Author Megan Shepherd, be sure
to check out all the details below.

This blast also includes a giveaway for a signed copy of the book and swag courtesy of Megan and Rockstar Book Tours. So if you’d like a chance to win, enter in the Rafflecopter at the bottom of this post. 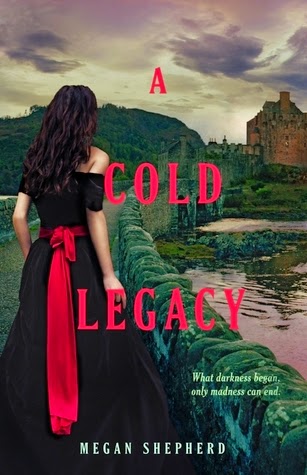 After killing the men who tried to steal her father’s research, Juliet—along with Montgomery, Lucy, Balthazar, and a deathly ill Edward—has escaped to a remote estate on the Scottish moors. Owned by the enigmatic Elizabeth von Stein, the
mansion is full of mysteries and unexplained oddities: dead bodies in the basement, secret passages, and fortune-tellers who seem to know Juliet’s secrets. Though it appears to be a safe haven, Juliet fears new dangers may be present within the manor’s own walls.

Then Juliet uncovers the truth about the manor’s long history of scientific experimentation—and her own intended role in it—forcing her to determine where the line falls between right and wrong, life and death, magic and science, and promises and secrets. And she must decide if she’ll follow her father’s dark footsteps or her mother’s tragic ones, or whether she’ll make her own.

With inspiration from Mary Shelley’s Frankenstein, this breathless conclusion to the Madman’s Daughter trilogy is about the things we’ll sacrifice to save those we love—even our own humanity.

Montgomery stopped the horses outside a tavern. He came to the carriage door, opening it just a crack to keep the rain from drenching us. “I’m going to ask directions. We can’t be far now.”

We watched him saunter over the muddy street as though he didn’t even feel the bite of freezing rain. A face appeared in the tavern window. The door opened and he spoke to a woman in a wool dress for a few moments, then stomped back through the mud. “This village is called Quick,” he told us. “The manor’s only five miles from here.” “Did you hear that?” Lucy murmured to Edward, still stroking his hair. “We’re almost
there. Just hold on. Everything will be all right once we arrive.”

Montgomery’s eyes shifted to me. Neither of us wanted to remind Lucy that the prospect of Edward’s fever breaking—and the Beast’s reappearance—was almost more frightening than the fever itself. Delirious, he was less of a threat.

“Let’s go then,” I whispered to Montgomery. “And quickly.”

He closed the door and in another moment we were moving again, passing through the rest of Quick. Then all too soon the village was nothing but fading lights. The storm grew and the road became rougher, and all the while Edward’s eyes rolled back and forth beneath shuttered lids.

Thunder struck close by, and Lucy shrieked. Montgomery whipped the horses harder, pulling us along the uneven road impossibly fast, trying to outrun the storm. I twisted in the seat to look out the back window at the pelting rain. A stone fence ran alongside us.

“We must be getting close,” I said. “Not soon enough,” Lucy breathed. “We’re going to crash if he keeps driving like this!”

The road widened, straightening, letting us travel even faster. Lightning struck close by, blinding me. The horses bolted. Lucy screamed and covered her eyes, but I couldn’t tear mine away. The lightning had struck an enormous oak tree, twisted from centuries of wind. The oak took flame, blazing despite the rain. A smoking gash ran down the trunk—the lightning’s death mark. I watched until the rain put out most of the flames, but it still smoldered, billowing hot ash into the night.

The horses pawed the earth, and I grabbed the window to steady myself. At this wild speed, just hitting a single rock at the wrong angle would send the carriage shattering to the ground. It was madness to go so fast. Couldn’t Montgomery calm the horses?

Just when I feared the carriage would careen out of control, it stopped short, throwing me against the opposite wall. I tangled in Lucy’s limbs as the chains around Edward’s body clinked. Balthazar grunted, jerking awake at last. We scrambled in the bottom of the carriage until the door flew open.

Montgomery stood in the pelting rain. I feared he’d say we’d broken another strut or the horses had gone lame or we’d have to spend the night in the harsh storm.

But then I saw the lights behind him, and the night took shape into a turreted stone manor with bright lamps blazing and gargoyles on the roof vomiting rain into a stone courtyard.

Montgomery’s eyes met mine beneath the low brim of his hat. “We’ve arrived,” he said. 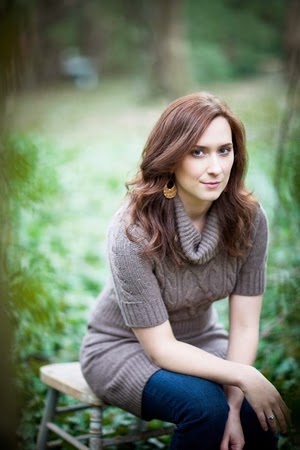 I’ve been many things, like a professional exchange student, park ranger in Montana, and LOST enthusiast, but what I am now is a writer.

I think it’s fair to say I was born into it. I grew up in the mountains of North Carolina, raised behind the counter of my parents’ independent bookstore, Highland Books in Brevard. Ah, so many free books. But I never thought being a writer could be a real career. After college I thought I’d end up as a foreign service officer somewhere dashing and exotic, like Canada. I studied French, Spanish, German, and Russian and still speak a few of those. Then I joined the Peace Corps and
spent two years in Senegal, where I learned a few more languages I’ll never speak again and lived in a mud hut with no electricity or running water. You can probably imagine how that experience went, but if you’re curious,here are the dirty details
.
It wasn't until a chance aquaintance read something I wrote and said, "have you ever considered being a writer?" that something clicked and I realized it was possible. My husband encouraged me, and I quickly fell head-over-heels in love with writing and children's literature in particular. I started out writing articles, which have appeared in Faces, Appleseeds, and Calliope magazines, and stories for younger children. I soon realized I wasn’t sweet enough to write fiction for that age and found myself writing young adult literature instead, which doesn’t require nearly as many tender moments and includes a lot more cursing.

When I'm not writing, I can usually be found horseback riding, day dreaming at coffee shops, or hiking in the beautiful mountains of Western North Carolina. I love to hear from readers, so please drop me a line!

I am represented by Josh Adams of Adams Literary. 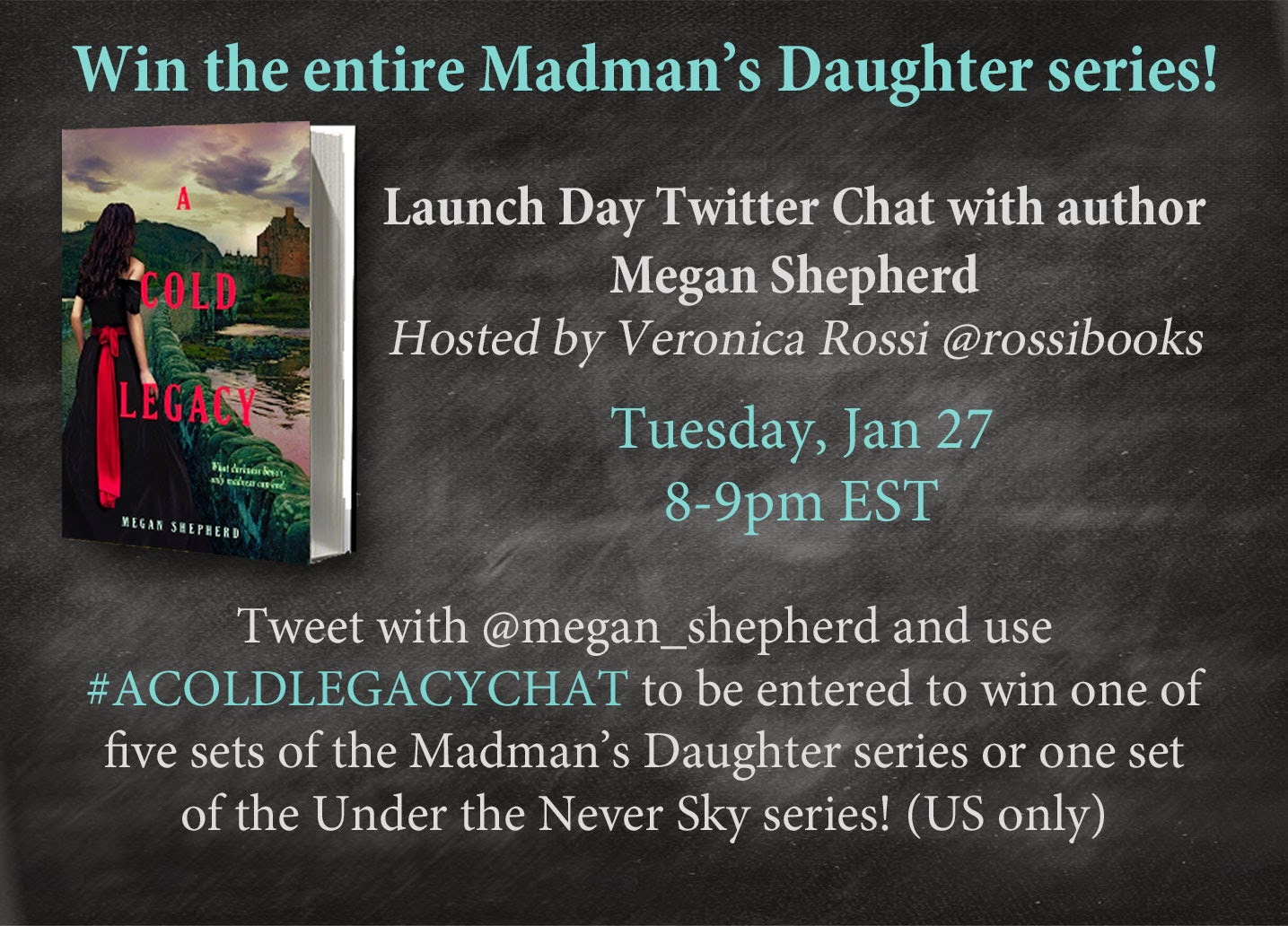 
1 winner will receive a signed copy of A COLD LEGACY and swag! US Only.
Ends on February 6th at Midnight EST!