Hey there everyone! Today I'm taking part in the Blog Tour for Shadows of Asphodel by Karen Kincy, organized byXpresso Book Tours!

I will be sharing by review & a Blog Tour wide giveaway (US & Canada only), so click HERE for the full tour schedule! But before that, let's get you some more information about the book & author, shall we? 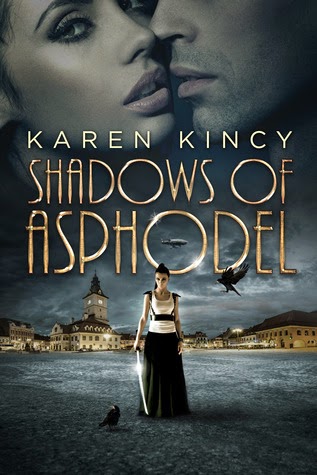 Shadows of Asphodel by Karen Kincy

When Ardis discovers a man bleeding to death on the battlefield, she knows she has to walk away.

1913. In her work as a mercenary for Austria-Hungary, Ardis has killed many men without hesitation. One more man shouldn’t matter, even if he manages to be a charming bastard while he stands dying in the snow.

But when he raises the dead to fight for him, she realizes she must save his life.

If a necromancer like Wendel dies, he will return as a monster—or so the rumors say. Ardis decides to play it safe and rescues him. What she doesn’t expect is Wendel falling to one knee and swearing fealty. Ardis never asked for the undying loyalty of a necromancer, but it’s too late now.

Ardis and Wendel forge an uneasy alliance underscored with sexual tension. Together, they confront rebels, assassins, and a conspiracy involving a military secret: robotically-enhanced soldiers for a world on the brink of war. But as Ardis starts to fall for Wendel, she realizes the scars from his past run more deeply than she ever imagined. Can Ardis stop Wendel before his thirst for revenge destroys him and everyone else around him?

(Dieselpunk romance. Recommended for ages 17 & up.) 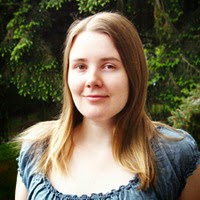 Karen Kincy (Redmond, Washington) can be found lurking in her writing cave, though sunshine will lure her outside. When not writing, she stays busy gardening, tinkering with aquariums, or running just one more mile. Karen has a BA in Linguistics and Literature from The Evergreen  State College.
Website | Goodreads | Twitter | Facebook

Dieselpunk romance... I wasn't really sure what that was before I read this book, and I'm still unsure what it is exactly, but I know I like it!

Shadows of Asphodel was quite a surprise for me, and a pleasant one! I will be making sure I won't spoil the book, or I'll be trying my best.

Ardis is a sword for hire, working for the archmages of Vienna and she finds herself rescuing a necromancer from a battlefield. He swears fealty to her until he can save her life and that's when the story really starts, with the travelling, working and fighting together.

The world the author has built is fascinating, with an alternative world of magic and technology and a different approach to historical events like World War I. Since I have a big love for fantasy and history, a retelling of history full of magical touches and some odd technology added here and there is something that I find quite enjoyable, though not all steampunk or in this case dieselpunk, manage to capture my attention and make me enjoy the world they paint as much.

Ardis is a fantastic character, she's strong, she's a fighter and she still has compassion and cares for others, despite her being a mercenary that's paid to be a "peacekeeper". She's running from her past but she isn't afraid to look back. I really really like how she was strong, feisty and didn't back down easily.

Wendel... well, he's a bit harder to like, like a prickly fruit you aren't sure you'll have the patience to peel to discover how good or bad it really is. He's a necromancer and also has a dark and tortured past, but he was a bit too moody and brooding for my taste. He eventually redeemed himself a bit, and even though he remained a bit annoying, he also had some cute moments.

There's plenty of action, steamy moments, revelations and epic showdowns. The ending is quite complete in a way, with no terrible cliffhanger but does leave enough threads untied for the sequel that I will be reading for sure. The romance might not have been my favourite, but that might just be me and my emotional state at the moment, but the world totally enchanted me.