Today I'm starting the last week of work before I finally get some vacation time being part of another Blog Tour for the new book in a series I love! I will be sharing my review and there's also a giveaway at the end of the post, so don't miss it! 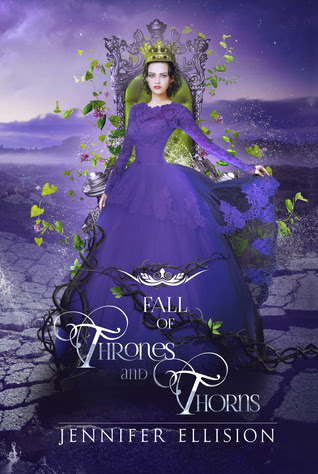 
War hurtles in, a typhoon over the sea.

After Bree’s life was torn apart, Nereidium had represented a haven to her. A place that—if she could save it—was beyond the King’s reach.

And, at last, she’s arrived upon its shores. But things in Nereidium are not what they should be.

The land is plagued by a rash of mysterious earthquakes, the likes of which it’s never known. The governors are distracted by old traditions, while Bree and her friends grapple with changing identities and the sense that the longer they wait to take action… the greater the danger from Egria grows.

Bree is tired of living under the shadow of King Langdon’s power. And she’s tired of waiting for him to be the first to act.

In this final chapter of the Threats of Sky and Sea series, it all comes down to Nereidium or Egria. To Bree or the King. It’s kill… or be killed.

And not everyone will escape the battle unscathed. Jennifer Ellision was born and raised in South Florida and lives in perpetual fear of temperatures below 60F. She spent a great deal of her childhood staying up past her bedtime with a book and a flashlight. When she couldn’t find the stories she wanted to read, she started writing them. She has an OTP, loves character analysis, and is a master of the fangirl flail, with a particular soft spot for fanfiction. She frequently bursts into song (and they are often of a Disney persuasion). Sailor Moon is one of her favorite things on this planet.

Threats of Sky and Sea is her first novel.

She also blogs at The Bevy Bibliotheque, where she talks about books, TV, movies, and other things that she goes fangirl over. For review requests or blog inquiries, please visit http://www.thebevybibliotheque.net to contact the blogger who best suits your request.

For some reason I had failed to realize that this was the last book in the trilogy till I was nearly halfway reading it and thought that it read like a final book! For some reason I expected 4 books instead of a trilogy! *shakes head at self*

Fall of Thrones and Thorns starts right where Riot of Storm & Smoke ended, with our characters in Nereidium and dealing with the shock and repercusions of the truth about Bree & Aleta being revealed to all.

The beginning seemed to be a bit anticlimatic after the shock, but the slower pace was quite necessary for the characters to deal with the revelations and the change on status and the new reality of the new place. There was character development that needed to happen and there were politics to deal with and that always slows down the pace and the action, both in books and (even more) in real life.

I was glad we got alternate POV for Caden, Bree and Aleta and we also got a few small peeks at what was going on at Egria which helped with not losing sight of where the real danger was coming from.

It's always hard to review a final book in a series because you try to avoid spoiling others that might have not yet started the series, so bear with me while I try to vaguely & spoiler-free continue to try to be articulate about the book!

There's so romance in the book but rather understated and pushed back to something secondary given the dire situations and the importance of the fight, but speaking as a romancephobe, there were times where I wished there was a bit more development to some of the pairings. And also, I wished that at the ending we had a wee bit more of a hint of what's to come? The big conflict is resolved and the future is full of hope, the rebuilding is in progress but I still don't know if those two will find a way to work out! But since that part of the ending is open, I can choose to think yes and be happy about it! ;)

A satisfying conclusion to the trilogy and well deserved 4 stars!