This week I'm back with more audibook reviews for my Wednesday Audio Waves feature here in the blog! And this week I have a full series that I had started but lost motivation to continue (despite loving the first book) but once I started re-reading the first book as audio, I totally binge and finished! 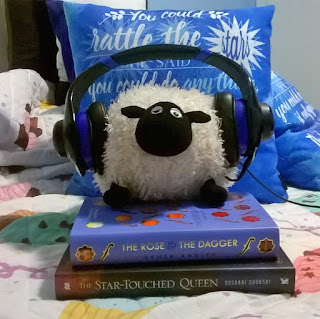 I must blame Cassi in particular for this binge read, because although both her and Nikki love these books and both are big Sanderson fans, Cassi was the one that raved about the narrator enough to make me jump on these audios even if it's just one guy doing all the voices. 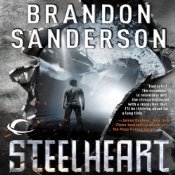 This one was a re-read for me and I really fell in love very early on with the narrator, he really IS the perfect David!

He did a great job with all the other voices too, even the female ones, and that was one of my concerns when I started listening to it. Every voice was distinctive and that really helped with the enjoyment of the book, none of them were irritating and I never once was confused about who was talking.

This was a re-read and a necessary one because even if I thought I remembered most of the book but turns out I had forgotten loads of the smaller details then later proved important in the rest of the series! And also quite a few of the not so smaller too!

The pacing of the book was fantastic and I listened to the whole book way faster than I had expected at first. 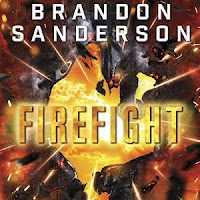 After the reveals and the ending of Steelheart, I was wondering what to expect from Firefight and no matter what I expected, it seriously wasn't what I got!

The narrator did an amazing job once again with all the voices, both from previous characters as well as the new ones. David continued being my favourite with his awesome humour, adorkability and always odd metaphors that never failed to made me laugh.

We got quite a few new revelations in this one and the world gets bigger and even a lil stranger than I thought it was on the first book. We learn more about the Epics and how they came to be, or how we suspect they came to be, and there's quite a bit of food for thought about Epics and their vulnerabilities and what makes them go bad.

The pacing is quite fast and full non-stop action and/or revelations and still it managed to include a lot of both individual character development as well as the relationships between characters, romantic or not!

The ending was quite a bit of a cliffhanger and I was itching to finally get Calamity to start listening to it ASAP! Very much deserved 5 stars to this one! 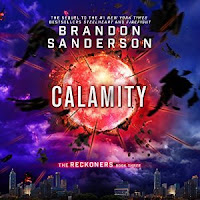 After the massive game changer that the ending of Firefight was, we find ourselves in Calamity wondering what will happen next!

David continues to be banking on hope and on the knowledge that what happened to Megan and what Megan did can be something all Epics can do.

He's now the leader and he's making his mission to stop the bad Epics from destroying cities and lives and to try and get those that can be turned back into their human selves, not the ones they are when they're taken over by their powers.

The pacing is once again fast and full of action, with very many tense moments, although it has enough light moments of humour (David and his crappy signature metaphors) to keep it balanced out.

We get more revelations and a lot of information, some of it answers, some of it creating even more questions!

A very hard book to review trying to avoid spoilers, but one that I thoroughly enjoyed! And I'm sure a big part of it aside from the book's own merits that I'm sure are many, is the narrator's! He did such a brilliant job! 5 stars for this one for sure!