A new week is starting and with it comes a new Mark This Book Monday entry! This book has been yet another leaving me with a mad book hangover and I was thoroughly tempted to re-read it as soon as I was done with it!

As it is a sequel, book 3 to be precise in an on-going series, I'm gonna be counting it towards my September is for Sequels challenge, even if it wasn't in the original goal pile! 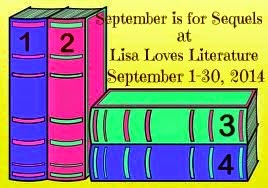 
This has been my most awaited sequel of the year, not final book, no debut but as sequel in an ongoing series? This WAS IT! So much that waiting for my preorder to arrive and take its sweet old time has been torture! Given the ending of the previous book even more!

Now, I had avoided most reviews before reading this book, trying not only to avoid spoilers but also because I wanted to experience the book with as little information as possible and I think I skimmed-read a few reviews, and only read Kim's at Midnight Garden, which was vague enough to make me want to read the book even more with very little concrete info, exactly what I wanted.

My review won't be as vague and although it won't contain any spoilers per se, if you want to experience the book as I did, maybe just stop reading. Just know that this is a brilliant book, and amazing sequel and one book that I wanted to be longer the more I read!

Celaena is really broken in pieces at the beginning of this book, and who would blame her, after everything that happened in Crown of Midnight. But the worst thing is that Celaena is depressed, is hiding and is trying to ignore everything that is breaking her into even more tiny pieces from the inside out. She hates herself, is scared of her own nature and cannot find the will or strenght to piece herself together and do what must be done.

But this book is not only about Celaena and Adarlan, this book expands the world in such a fantastic way. We're introduced to new characters and new regions and we dig deeper into the power of Adarlan's king and all his schemes and his long play for power. We find answers to many questions about magic and its absence, Celaena's past and powers, and once again we also get quite a few more questions thrown at us.

Rowan, Manon and Aedion are the main new characters we are introducted to for the first time proper in this book, and for two of them the connection with Celaena is very clear, one in the past and one in the present, but for the third one it's quite not so clear and I'm extremely curious to see how the connections will develop in the upcoming books.

We get quite a few different POVs in this book and it quite says something about the talent of Sarah J Maas that I never felt bored with any of them, not from well known and loved characters as Celaena, Chaol (!!) or Dorian, but also the ones from Aedion, Rowan or Manon. To be perfectly honest, from all the new characters, Manon's POV chapters were my favourite, even if they seemed the most disconnected from the overall plot so far. That actually made me even more intrigued to see how Manon and her Thirteen will come across Celaena and/or the rest of the characters.

Rowan is a Fae warrior, bound to Maeve and sent to get Celaena and train her. He doesn't like her at all, judging her by appearances, but he ends up being not only a tough teacher but a true friend that helps Celaena start the process of healing and learning to accept herself as a half Fae & half human, and in the process he also undergoes quite a few changes. Their banter and interactions were quite fantastic, and the way they became real allies and friends was done great and was tough but great to read. As fascinating as I found him as a character from the very beginning, it really took me a while to warm up to Rowan, but that's very much fitting with his Ice Prince & Fae Warrior extraordinare persona.

Aedion is Aelin's cousin and his assigned protector, but after the conquest of Terrasen, he's now part of the King of Adarlan's army and moreover, a celebrated general. He is the one that interacts the most with Chaol and Dorian and as with Rowan, it took me a while to warm up to him, even if I found him a fascinating character. His flashbacks of memory and the one's that Celaena as Aelin had were fantastic to read, even more for me that I tend to want to know everything!

And then we reach Manon... oh how I loved reading Manon's POV! I didn't think I would at first, cause after reading the first introduction to Manon, I wasn't very keen on her as a character but then... I simply fell in love with her, the Ironteeth Witches, her Thirteen and Abraxos! Even if we are left without knowing what exactly the part they'll play in the bigger game, I just loved learning more about them and the path that Manon starts by picking her wyvern.

Chaol and Dorian don't seem to be as central to the story now that they're apart from Celaena, except that they still are. They're at Adarlan, closest to the king and in the most direct of dangers. Chaol is still fighting between honour, loyalty and doing what's right. Fighting with the revelations he isn't really facing, and quite a broken man because of his choices and his will of iron in trying to keep his word. Dorian... Dorian has grown so much as a character in this book, he won't simply hide or back down and he keeps on trying to find a way to do what's right, for his kingdom, his people and Celaena.

The ending of this book was not as heartbreaking for me as the one for Crown of Midnight, but that doesn't mean that reading the final chapters was not hard as hell and had me bitting my nails, scared to see what would happen! And yeah, the ending is cruel and awesome and I need book 4 like NOW!!

P.S.: For those like me who are animal lovers, rest assured Sarah J Maas keeps on being awesome and Fleetfoot is safe and sound!

Amazing book, this series keeps on getting better and better with each book! Very much deserved 5 stars and some more!!