Hey there everyone! Today I'm taking part in the Blog Tour for Threats of Sky And Sea by Jennifer Ellision, organized by Xpresso Book Tours! 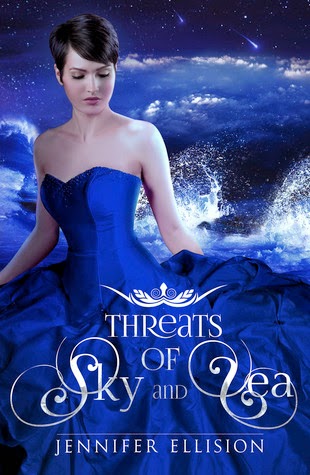 Synopsis:
Sixteen year-old Breena Perdit has spent her life as a barmaid, innocent to her father’s past and happily free from the Elemental gifts that would condemn her to a life in the Egrian King’s army. Until the day that three Elemental soldiers recognize her father as a traitor to the throne and Bree’s father is thrown in jail—along with the secrets from his last mission as the King’s assassin. Secrets that could help the King win a war. Secrets he refuses to share.

Desperate to escape before the King’s capricious whims prove her and her father’s downfall, Bree bargains with him: information for their lives. It’s a good trade. And she has faith she’ll get them both out of the King’s grasp with time.

But that was before the discovery that she’s the weapon the King’s been waiting for in his war.

Now, time is running out. To save her father’s life and understand her own, Bree must unravel the knot of her father’s past before the King takes his life– and uses her to bring a nation to its knees. 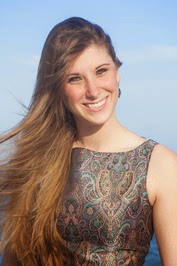 Jennifer Ellision spent a great deal of her childhood staying up past her bedtime with a book and a flashlight. When she couldn’t find the stories she wanted to read, she started writing them. She loves words, has a soft spot for fanfiction, and is a master of the fangirl flail. She lives in South Florida with her family, where she lives in fear of temperatures below 60 Fahrenheit.

Threats of Sky and Sea, a young adult fantasy, is her first novel.

You can find Jennifer online at www.jenniferellision.com, or on twitter @JenEllision.

I have been quite in the mood for fantasy books and this book was the perfect fantasy read to my mood!

I got my ARC from Xpresso Book Tours so thanks a lot Giselle for letting me be part of this tour! I will try my best to keep my review spoiler free, but I might find myself babbling a bit too enthusiastically and end up letting something slip, but I promise no big reveals will slip my lips!

The book starts with Bree in the forest, trying to gather some wood to take back to the inn runs with her father. She finds herself following some screams in case someone needs help but stumbles into something bigger that she could even imagine. Soon her life changes completely and she discovers that her father had kept her in the dark of way too many things and that neither her father or herself are who she had believed they were. Her world changes so suddenly and in such an abrupt and dangerous way that I'm surprised how well she handled things, even if she had her moments here and there!

The world building was quite fantastic! We start small, with this small inn near a river and a small village nearby. With Bree and her Da, that make a fantastic team at staying afloat even in difficult times, and you can see the genuine love between them and how much Bree likes her life. Then little by little we get a bit more information about what's beyond the inn, and then we go on discovering more of the bigger picture and the world as Bree experience and fumble through it. There's a fantastic mix of magic with the Elementals (that made me think a bit of Avatar and the element benders) and the medieval feel of a court full of political intrigue and an overly powerful and ambitious king.

The characters were quite interesting, and I absolutely adore Bree! She's headstrong but kind and with a resilience that I wish I could have if I'd find myself in a situation like hers. She gets the life she had taken from her, mistreated & taken as prisoner, discovers that her father has lied to her... then gets chucked into court (that is like a nest of vipers) and is expected to change who she's always been and be grateful for it. She is spied on, experimented on, threatened by the king and mostly ignored by her own father (even if it was a wise choice due to the spies all over the place)...

Bree's Da was quite a mystery and by the end of book we're still left with quite a few questions about him, that I hope we'll get answered in upcoming books, because we can see he was quite a complex character with a dark past full of hard choices but a real love for Bree. The king was a rather typical villain to hate, but I think there's also more to him than just the ambition and power-crazy tyrant we see. And talking about evil characters I can't not mention Lady Kat, the king's Elemental assassin and right hand, she is one very hateful character that deals with threat and knowledge as well as fear.

Aleta the royal princess was quite an interesting character too, so prickly and distant at first but a character full of layers and that becomes a true friend and ally to Bree. I think these two can make a fantastic team together. Then we have Prince Caden, the heir of the kingdom that finds himself in a most difficult position between family loyalty and what his moral compass tells him to do. An interesting character that has great banter with Bree and makes for an interesting love interesting, even if the romance is very very subtle and develops very nicely and slowly.

I was a big fan of the romance in this book because even if you could suspect where it was going, it was never thrown in your face and you can see a fondness growing and turning into something more, it never takes over the plot, or the characters brains. Even if the hormones might get the best of the love interest in one certain occasion, desperation and all that!

As far as the plot goes this is the first novel of a trilogy (hopefully a longer series) but it's not just world building and barely any plot movement. Here we get a pair of big reveals and although I suspected both beforehand, they were not obvious or dull, and we still don't really get the full picture. The ending is not exactly a cliffhanger but there's a lot to happen and loads of unanswered questions! I'm really looking forward to the next book and give this one 4 to 4.5 stars!

Open to US/Canada only