Yesterday I got not just one but two packages, one from Hope, and one from yet another of my favourite sellers AND friend: Lex.

Lex or Lexie (aka Headless Tess DIY) has not just become one of my favourite sellers, but also an amazing friend. I first saw her listings on eBay, but was a bit unsure about her necklaces, I was not sure of the size or how they'd look on a person... even so, I bid on a pair of her necklaces, but was outbid. In one of those weird coincidences I got a friend request from her on myspace, and we started talking. She was so nice and helpful! I asked for a custom request of an Alice in Wonderland necklace, and she was amazing during the whole process, and the necklace exceed all my expectations!
I then bid on another of her eBay necklaces, the Kittyfly (a butterfly with a Hello Kitty head) and won it. Lex sent it right away, and it wouldn't arrive... I checked with my post office, and apparently it had left the post office to be delivery during a week where a new postwoman had been covering for my usual one... so I suspected she had kept it, cause it never arrived... I told Lex, that already worried about it not arriving, and she decided to make me another without charging me anything extra... I offered to pay for shipping at least, and then decided to order another custom, so at least she could get some more cash, even if she didn't want me to pay for the second Kittyfly. These two necklaces were my first Headless Tess originals, but they were only the beginning!
The weirdest thing ever happened after 3 months... The original Kittyfly arrived!! It had a sticker that said she had been sent to Colombia, in South America!!! So, now I have TWO Kittyflies!! I really felt horrible, cause I made Lex to work extra, when the Kittyfly was just taking a vacation, you could say...
After that, I haven't stopped getting more necklaces from her, either from her Etsy store, once she did the move to Etsy, or getting more customs, cause any necklace you can dream of, Lex can deliver, and she will surpase herself every single time! I've got Hello Kitty as a nurse, two Maiden necklaces, a pair of Nightmare Before Christmas...
She even made us a pair of matching keyrings, for me and Gaurav, with a pic of us, as a surprise present! It was such a lovely surprise, and I absolutely love it! I don't use it, cause I think it looks better hanging in my room, where I can look at it, and won't get damaged! 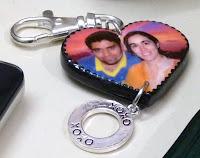 I love sporting my HT necklaces every occasion I get, but since I can't really wear them everyday at work, working at a hospital, hygiene rules are strict, even more when working with patients in protective isolation, so I go crazy wearing my HT necklaces on my days off or while on holidays!!
Take a lil look at a few of the necklaces I've worn during my last holidays in India:
First of all, Hello Kitty as a cupcake!:

And two more gorgeous necklaces, a custom Maiden one and a gorgeous Saphire butterfly!:

I have a huge and wonderful collection of her necklaces, and truth be told I haven't counted them! I had never been a girl to wear much jewelry, but with Lex's necklaces, I just can't get enough!
Going back to yesterday's package (the reason for this entry!).It was, as usual, an amazing one, even more so this time! I got three necklaces for myself, and also three necklaces I'm one us as presents for friends of mine, since I've got asked quite a few times about them! I even got an extra treat! Lex also makes clothes, though doesn't usually sell them, and she sent me the CUTEST Hello Kitty tube top! Let's take a look at all my goodies!:
First of all, the cutest Wall-E & Eve necklace everrr!: 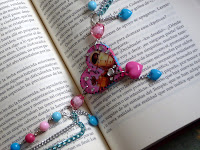 An absolutely lovely necklace, with one of my favourites scenes from the movie, when Wall-E is trying to wake up Eve sharing with her a lovely sunset!

Secondly, a oh sooo cool and sexy Dr Who necklace!: 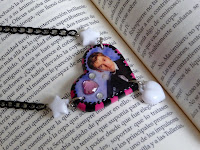 As you can see, the Doctor, also know as Barty Jr, is featured here with the beloved Tardis! I feel the need to sing and/or hum the series theme everytime I look at it!

And last but not least, the one I'd say has become my absolute favourite of all the necklaces Lex has made for me, like ever:

This is the Tree of Life as it is depiced in an amazing movie by Darren Aronofsky, "The Fountain", starring Rachel Weisz and Hugh Jackman. A wonderful movie about love & life.
Gaurav and me loved the soundtrack before watching the movie, and fell in love with the movie, so I really wanted this as a necklace, and Lex did an amazing job with it!

And last, but not least, not at all! A shot of all my loot of today! My three necklaces and my Hello Kitty tube top! :

Excuse once again the flat pic of the top, but the bf is in India, and I'm no fan of the myspace angles and taking self pics, so this'll do!
Farewell, my friends, until we meet again!
Publicado por Pili en 11:34 PM