Happy Cyber Monday guys! Are you doing some online shopping?? I totally plan to do so as soon as my paycheck comes in! I've been eyeing stuff for quite a while, and now that there are so interesting sales, I'm gonna indulge a lil bit! Not in books though, giving my self imposed book buying ban.

Today I'm starting the week with a mini reviews edition of Mark This Book Monday. Today I have two books that are based on mythology or folk tales, and as such both will count towards the 2015 Mythology Reading Challenge, which means I continue to improve on that already conquered challenge! 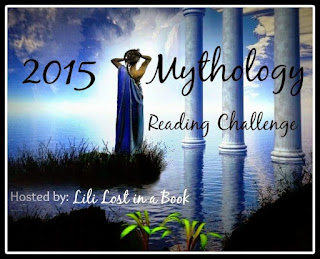 Toads and Diamonds by Heather Tomlinson


A gorgeous book both inside and out! With a beautiful mix of mythology and fairy tale/folk tale feel, with goddesses and gifts that could be blessings and curses.

The story is one that I think I've heard before, two girls meet a woman that is a Goddess in disguise (could be a fairy or something other, cannot remember the first time I heard it) and each of them get a different gift/curse. For one diamonds and flowers drop from her lips everytime she speaks and for her sister it's toads and snakes.

I've just loved the way the author twisted the tale here though, although the girls get the same gifts, in both cases it's bestowed both as a gift and a lesson, not gifting one girl and cursing the other. And the relationship between both girls although they're stepsisters is wonderful, they love each other as sisters and support each other as such.

I love how each of them faces their gift/curse differently, and how their mother handles each curse with the same aplomb and want for secrecy and how it just goes awry.

Diribani is taken to court with the prince and princess, and there among privilege she wonders what good is the miracle she's been gifted and how can she help others. Tana is feared by the conqueror rulers but not the people, and starts a journey to understand the Goddess' purpose.

I simply loved the writing and the descriptions in this book, so lush and vivid! It was clearly based on the Mughal empire conquest & of the many hindu kingdoms of India, even if the religions are changed and don't really correspond, they do have that feel of cultural clashes and how the conquerors handle letting the conquered having their traditions and their faith.

It has a very clear folk tale feel in the telling of it all, because while there's plenty of world building to show us the kingdoms, the plot doesn't drive to a certain event per se, but more as a way to change things and to get the girls to find their way and learn their lessons and teach them to others.

A wonderful take on a known folk tale, where the girls get to make their choices and fight their battles as well as they can, with a wonderfully diverse background! Very much deserved 4.5 to 5 stars!


I discovered this book via Twitter when Sonali Dev recommended it to me. I requested it on NetGalley and was approved and a lil late because it's already been released, I finally got to read it!

Epic fantasy based on hindu mythology. If that sounds intriguing and interesting to you, go grab this one immediately! A certain knowledge of Hindu mythology would be good, to sort of know who is who, but the author also adds her own spin and twist, so it's not absolutely necessary (or you can read the book and find references & then learn some about Hindu mythology too!).

Lord Karna is the Soul Warrior, the one that fights to keep the balance and the demons out of the Human Realm. And he gets assigned a task he never wanted, train 6 new warriors to help him defeat the demons.

One word of warning, different incarnations, God's avatars as they are born into the human world, reincarnations, human life and then immortal life... yes, it is confusing! But that's Hindu mythology for you... take it or leave it, really. It's explained as easily as it could be here, but it's a complex and confusing mess, probably even for the Gods themselves. It does let itself to epic fantasy and loads of family & romantic drama very well though, and it's handled great by the author.

The plot progresses with quite a bit of family and relationship drama, as expected with Gods & Goddesses, learning lessons from the past and Karna learning lessons from his charges. What seemed like a strange request turns to be a much bigger quest, one where he'll have to choose between honour and the task he always fought for over thousands of years, and family and love and finding a way to protect the Human Realm and those he love.

Full of quite a few twists, fun characters as the 6 girls have their unique voices that manage to drive Karna nuts for the most part, a plot that thickens as pages go by and quite the cliffhanger at the end, this is a book that I highly recommend if you like epic fantasy with a heavy mix of mythology!

A bit torn between 3.5 to 4 stars! Cannot wait for the sequel!