Given my failure this week at blogging so far, I needed to add another extra Thursday Thoughts to the so far empty week!

I had a fairly good reason for the radio silence since I've been reading multiple books at once (not that it is new) but most have been re-reads or readalongs and also, FINALLY my living room furniture arrive!!

And because I'm crazy excited about them, I'm just gonna share a pic of them just as they had been finally assembled, will have to share pics of them filling up with stuff next time! 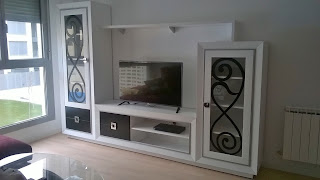 Now, onto today's review!! I think those of you who know me a bit are aware that I love fantasy books, but at the same time I'm not usually a fan of retellings, but one of my auto-buy authors go and write one, I have to check it and thankfully, trusting the author pays off!!

The Shadow Queen by C.J. Redwine


First things first, I'm not the biggest fan of retelling stories there is, and when I see a book is a retelling of something else I'm usually a little wary of it. BUT C.J. Redwine became an auto-buy author since the very first book of her Defiance trilogy, so when she announced this one, a retelling of Snow White, I knew I'd read it!

And I'm really quite happy that I kept my trust on the author, because The Shadow Queen was a fantastic retelling! It mixed the fairy tale feel & also made it more regular fantasy-like if that makes sense! The prologue was very much done in a more typical fairy tale story format & style, but then when we move forward in time to meet Lorelai again, the narrative is less typical and much more engaging!

We have two main POV characters, Kol and Lorelai, but Lorelai IS our main character, our Snow White! I feel like the story is a bit inspired by both the classical story and the Snow White & the Huntsman movie, at least given that our Snow White is a fighter and not like the Disney version! ;) And no, there are no dwarves in this one, we get something way cooler, since we get DRAGONS!!

Lorelai has magic and is determined to defeat the evil queen, Irina, and is simply an amazing main character! Driven, brave, capable and compassionate. She's an absolute warrior and ready to do the right thing at any personal cost but not at the cost of those around her. I simply adored having a princess that didn't need rescuing, although she welcomed allies of course! She dealt with grief but didn't let it paralize her turn her cold, didn't let a pretty boy make her loose the view of what's the most important and has been for the past 9 years, but still allows herself to be open to connections and to love!

Kol is the other POV character and he is so much more than a prince that kisses our girl to wake her up, although weeeell, nope, not saying anything else. Kol is a reluctant prince that finds himself in a position that he never thought he'd be in and never wanted, but that raises to the occasion and that like Lorelai, is fighting to do what's right for others more than for himself.

The relationship between those two was quite fantastic, and slowly developed from "casual meeting where the girl save his life and his friends" to "I'm going to kill you but I don't want to" to allies and much more!

I must also talk about the Evil Queen in this story... Irina is evil but not because of her magic but for her own twisted reasons that you sort of can understand. You really don't because she's just blinded about her sense of entitlement and what she thinks she's been robbed of, but it's not random evil, it's rooted on a sense of loss and it twists her to forgo love for power. A very intriguing character and a well developed villain!

All in all, I really loved this one! It's very much its own story although you can see the nods here and there to the original story and the roots of it. I cannot wait to read the next book in this series and see what fairy tale will be retold, C.J. Redwine style! Well deserved 5 stars!!